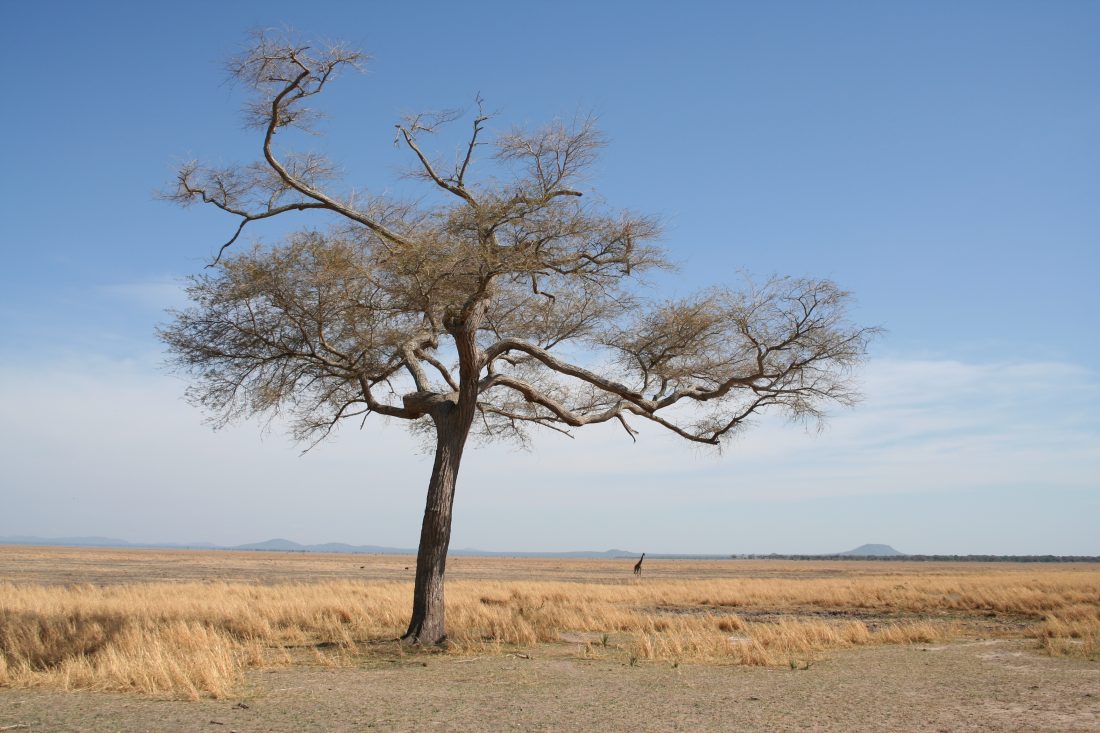 For The Times Travel

The throaty grunt of a lion woke me. Through the mesh windows of the tent I watched a half-moon rising over the Kapapa hills. Then the grunt again: closer. I remembered the words of the camp manager, “Don’t activate the alarm unless it’s a medical emergency.”

The throaty grunt of a lion woke me. Through the mesh windows of the tent I watched a half-moon rising over the Kapapa hills. Then the grunt again: closer. I remembered the words of the camp manager, “Don’t activate the alarm unless it’s a medical emergency.”

Did that include abject terror, I wondered, checking the tent zips. At that moment the crashing started: a thunderous thrashing and splintering of wood from the trees twenty feet away from me. Heart rate rocketing, I watched as three elephants emerged, moved slowly past my tent and out into the night across the grasslands of Chada Plain.

It was 2am, my first night in the most remote National Park in Tanzania. My choice, however – I didn’t want to feel cocooned in a bubble on safari, queuing behind dozens of Land Rovers for a photograph of a lion before returning to an air-conditioned camp with a well-equipped gym. And importantly, I wanted to travel with a company that took its environmental responsibilities seriously, and taught its guests something of the bush and the local people.

This I found with Journeys by Design, a Brighton-based company set up by environmental scientist Will Jones, which specialises in imaginative safaris to remoter parts of Africa, and supports conservation projects to help local areas and communities. So here I was, the only guest in a camp heaving with elephants and grunting lions, longing for the dawn.

When dawn came, Chada Camp was an entirely different and exceptionally beautiful place. The sun shone over caramel grass, the birds sang and Vervet monkeys stole my breakfast. Chada is one of only two camps in a million hectares of Katavi National Park. Wild, inaccessible, it receives very few visitors – 100,000 tourists a year pass through the Serengeti, but no more than 150 visit Katavi.

The camp – several canvas tents pitched on a beautiful promontory – is very comfortable: cotton sheets, hot shower suspended from a fig tree, perfect chocolate mousse for pudding. But it is clear that the conservation of the park is paramount. So the energy is solar-powered; the soap is beeswax and the loos are long-drops. “The park is a remote place and needs to make money from visitors to prove its viability and prevent it from being developed agriculturally,” explained Squack, the camp manager. “But we want our footprint to be as small as possible.” The region surrounding the park, Mpimbwe, is one of the poorest in Tanzania (itself one of the poorest countries in Africa) and Chada is now working with a local NGO to reap the conservation benefits from the limited tourism, as well as supporting a nascent honey-making scheme and helping to protect the forest between the park and the villages.

We left camp every morning at dawn when the light was sharp and the animals busy in the cool of the day. “They’re gasping for water now,” explained my guide Silvanus. “This time last year, the rains had already arrived and the river was flowing.” Katisunga River winds for miles, each golden bank lined with flapping borassus palms until in the shimmering distance its mouth opens onto a huge floodplain. We drove along its dry bed, past hippos competing for tiny pools of thick muddy water, and crocodiles piled high in caves, preserving energy after months of gorging on catfish.

With my senses attuned to cities, a good safari guide was essential, and Silvanus was inspiring – testament to the “ethical game-drive training” he receives from the company who run the camp, Nomad Tanzania. So while he avoided unsettling the animals, he showed me how to recognise the stench of rotting zebra flesh that signified a nearby kill, or the flashing blue plumage of a lilac-breasted roller that courts his mate by flying high, then rolling down the wind to join her. And all around us the stark cycle of life and death: a mother warthog steering her squealing babies safely away from a hyena; an old buffalo dying in the long grass, the small birds on his back pecking at the blood from a deep lion wound.

From the burnt plains of Katavi, I flew over the Mahale Mountains to Greystoke Camp, on the lush eastern shores of Lake Tanganyika. The pilot was Roland Purcell, the inspiration behind both Chada and Greystoke, and an impassioned conservationist. When he first arrived in Mahale, he travelled down the lake on the passenger steamboat “MV Liemba” (made famous by the film African Queen), and slept in tents on Kangwena beach.

Roland developed a strong connection with the local Tongwe people, the indigenous tribe who were removed from their land when the area became a National Park. He has now set up the Tongwe Trust, a charity that will be run by locals, with the aims of preserving their cultural heritage, raising the villagers’ income and helping to extend the forested range of the chimpanzee groups. “The Tongwe are regaining control over their land”, he explained. “We need to acknowledge that they were the original inhabitants of the area”.

His original camp on Kangwena beach is now a collection of six luxurious wood and thatch bandas (huts) which look out across the lake to the distant Congolese hills. Behind it the rain-forested slopes of the Mahale mountains rise 8,000 ft to the summit of Mt Nkungwe, the revered peak of the Tongwe. Deep within its tumbling mass of creepers and waterfalls lives the world’s largest population of Pan Troglodytes, or chimpanzees.

The park’s “Mimikire Group” of chimpanzees (a total of 60 in Mahale’s population of 2,000) has been the subject of extensive research by a Japanese research team from Kyoto University since 1965. They have made important discoveries about the social systems of chimpanzees, and their use of plants to self-medicate. The M Group has therefore become “habituated” to human presence.

We tracked the chimpanzees every day, following a Tongwe tracker up and down humid paths as he slashed at the undergrowth with a machete. The chimpanzees would appear from nowhere, loud and confident, whooping and yelling, throwing themselves from branch to branch, hurling sticks and grooming their friends. Big-eyed babies dangled upside down from vines, while their shyer mothers hung back, gnawing saba fruit and examining their toes.

A chimpanzee called Orion came hurtling towards us, whooping and slapping his hands on the ground aggressively. Our guide whispered, “Stand up and stay still. We need to show him our height and strength.” As we did, Orion veered away. In all this to-ing and fro-ing of human/primate power displays, the light faded, the rain grew heavy and we crouched close to the ground to avoid the lightning that flashed within feet of us. At the sound of thunder the chimpanzees screamed at the sky, then shuffled off into dense bush, looking miserable. “They hate getting wet,” our guide told us. It was a humbling experience. And I realized that humility was the essence of both safaris, a sense of respecting the ecology and local communities whilst allowing visitors to feel connected to their wild surroundings.

After five days the Cessna took me to the town of Arusha in Northern Tanzania, from where I would catch another flight home. We flew low enough to appreciate the circular encampments of the Maasai people, the vivid red earth that lies either side of the vast Rift Valley, and – as we came into land after four hours bumping through the thermals – the lilac blue of the Jacaranda trees in bloom.

Getting there: Jo Eede travelled with Journeys by Design and Kenya Airways (tel. 01784 888222, www.kenya-airways.com). Africa specialist Journeys by Design (+ 44 (0) 1273 623790, www.journeysbydesign.co.uk) offers tailor-made safaris to the remoter corners of Tanzania. For a two week private safari to include four nights in Katavi and three nights in Mahale tracking families of wild chimps cost per person starts at £3,500 for all ground arrangements, excluding international flights.

Tips: The best time to visit is from June after the rainy season, to February. The big rains arrive in March through to end May. The European winter is also the best time for birding. If you want to coincide the safari with the wildebeest migration in the Serengeti then best months are January to March.

Benefits: in addition to the environmental design of the camps, Nomad Tanzania actively supports its own Tongwe Trust with regular contributions of US$5 per person that go through either Katavi or Mahale. Journeys by Design makes automatic donations to both Trusts for African Schools and The Flying Doctors.